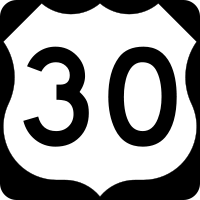 U.S. Highway 30, originally known as the Lincoln Highway, crosses the rolling prairies and deserts of southern Wyoming, with heavily timbered, snowcapped mountains in view nearly all the way.   Although it reaches its greatest altitude (8,835 feet) near Laramie and crosses the Continental Divide at Creston, it offers easy grades, with little mountain driving.  The route connects several of the largest towns in Wyoming, yet has vast stretches where no dwelling is seen for many miles.  Long freight trains chuff over glistening rails near the highway, and streamlined expresses slither swiftly through the sage, making bright orange streaks across the dead brown and gray-green plain, which sometimes sweeps unbroken from one blue barrier to another.

In October of 1913, the Lincoln Highway was proclaimed to be the nation’s first transcontinental highway and covered 3,300 miles through gravel, mud, and sand.  Across Wyoming it followed the right-of-ways abandoned by the Union Pacific Railroad in 1901.  Many towns were already established along the railroad, and within each of those towns up sprang filling stations, hotels, cabins, and cafes.  However, one should not be confused by highway names such as the Lincoln Highway, Highway 30, and Interstate 80.  In 1926, U.S. Highway 30 was built along the same route of the Lincoln Highway, but a much straighter route resulted.  Interstate 80 furthered those changes along the same route.