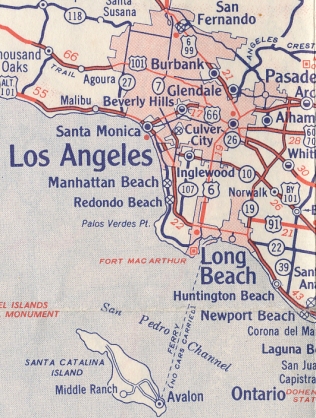 The history of the Los Angeles area abounds with the gargantuan, the fantastic. Settled more than sixteen miles inland from a shallow, unprotected bay, it has made itself into one of the great port cities of the world; lying far off the normal axes of transportation and isolated by high mountains, it has become one of the great railroad centers of the country; lacking a water supply adequate for a large city, it has brought in a supply from rivers and mountain streams hundreds of miles away. In little more than half a century, lots listed at a tax sale at a price of 63 cents apiece have increased in value to the point where they are worth more than that price to the square inch. It is not surprising that a city of such incredible achievements should become the home of fantasy; the film industry could not have found a more stimulating environment.

Much of the historical text of this travel guide has been provided by LOS ANGELES, A Guide to the City and Its Environ, a book in the American Guide series compiled by the workers of the Writers Program of the Work Projects Administration in Southern California.  The guide was sponsored by the Los Angeles County Board of Supervisors and published by Hastings House, New York in 1941.  The text has only been slightly edited, usually only where an adjustment to the passing of time was required.

Using the original guide as its foundation, this travel guide updates the previously mentioned time references and includes additional historic sites and landmarks from various sources.  Most importantly, provides updated location information for all listed sites with accompanying latitude and longitude coordinate data.  Over the past 70 years, the significant growth of the Los Angeles area has included the requisite street and highway designation changes, as well as the unfortunate elimination of some important historic locations.  This Historic Cities guide takes into account all of those changes, so the traveler of the present day can enjoy what was once there, and what is still present.

Visit www.autotrails.net for more guides on Google Maps and for eBooks.