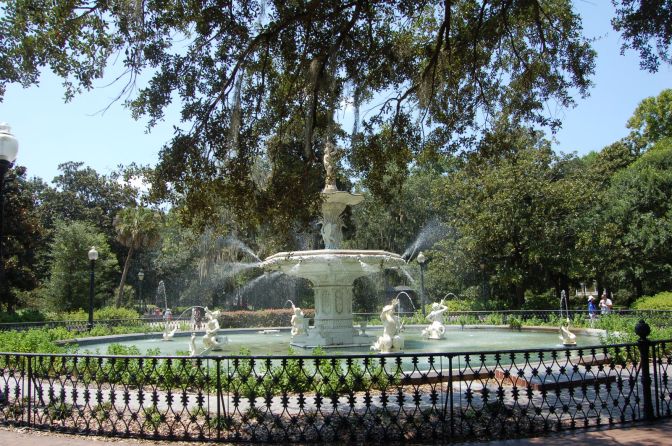 The most heavily traveled road in Colonial America passed through here, linking areas from the Great Lakes to Georgia. It was laid on animal trails and Native American trading and warrior paths. Treaties among the Governors of New York, Pennsylvania and Virginia and nineteen chiefs of the Iroquois League of Five Nations in 1685 and 1722 opened the colonial backcountry for peaceful settlement and colonization in Georgia. The Indian Path had two branches from Carolina, the western branch to Augusta and the eastern to Savannah, formed to find salt and game. This later became part of Great Philadelphia Wagon Road.

The plan of Savannah was based on a sketch in Villas of the Ancients by Robert Castell, who died in one of the English debtor prisons that Georgia was founded to relieve. From this sketch, James Edward Oglethorpe, founder of the city, and Colonel William Bull, the leading engineer of the Carolina colony, designed Savannah on a plan to which later builders have adhered. After the landing of the first settlers on February 12th, 1733, Oglethorpe began to lay out the town on a square tract of 15,360 acres to accommodate 240 families. He named the town Savannah, which is believed to be derived from the Sawana or Shawnee Indians, who once inhabited the river valley. Because the Spanish word sabana means flat country, some historians declare that this term was applied to the entire coastal plain by Spanish explorers who preceded the English settlers by two centuries.

Savannah became the seat of government when Georgia was made a Royal Province in 1754, and two decades of commercial growth and improved trading conditions followed. At the beginning of the American Revolution, the town had many unyielding Loyalists, but the hot-headed younger men set up a liberty pole before Tondee’s Tavern, shouted approval of the Lexington victory, and organized a battalion headed by Colonel Lachlan McIntosh. When two British war vessels and a transport anchored off Tybee Island, at the mouth of the Savannah River, in January of 1776, the Royal Governor, Sir James Wright (1714-1786), escaped on one of them to Halifax, Nova Scotia. The signing of the Declaration of Independence was celebrated riotously, and in the following year Savannah became the capital of the new state. On December 27th, 1778, Colonel Sir Archibald Campbell landed 2,000 British troops a few miles down the river to besiege the town, which was defended by General Robert Howe and 600 men. Failing to guard a passage through the surrounding marshes, Howe, on December 29th, lost the town and more than half of his men. For this, he was court-martialed and forever divested of military prestige. Following the British occupation, Governor Wright returned. In September of 1779, a long siege was begun by Count d’Estaing’s French fleet, assisted by American forces under the leadership of General Benjamin Lincoln. Their grand assault of October 9th, however, was a disastrous failure, with more than 1,000 casualties. It was not until 1782, when General “Mad Anthony” Wayne’s American forces struck, that the British at last evacuated the city.

After the Revolution, there was another period of expansion. The city’s first playhouse was built in 1785. The city was incorporated in 1789, and after Eli Whitney’s invention of the gin four years later it sprang into eminence as a cotton center. Tobacco, shipped down the river from Augusta, made Savannah a market for this commodity. The growth of surrounding plantations and the disposal of Indian lands were other factors in its expansion.

For the defense of the city during the War of 1812, Fort Wayne was strengthened, and Fort Jackson was built two miles downstream. In May of 1814, the U.S. sloop Peacock captured the British warship Epervier, brought it into the harbor, and confiscated $10,000 in specie aboard the British ship. The half century following the War of 1812 was an era of rapid development in transportation. In 1816, the steamboat Enterprise carried a Savannah party upstream to Augusta.

In 1819, maritime history was made when on May 22nd, 1819; the City of Savannah was the first steamship to cross the Atlantic, sailing into Liverpool, England. The successful use of steam in coastwise vessels inspired William Scarborough and several Savannah merchants to organize the Savannah Steamship Company which was formed on December 19th, 1818. The Savannah, equipped with adjustable paddle wheels, was constructed at Corlear’s Hook, New York, and reached Savannah on March 28th, 1819. President James Monroe made a trip to Tybee aboard this vessel. After arriving in Liverpool, the steamship continued on to St. Petersburg, Russia and then returned home. So expensive was this expedition that its sponsors declared the vessel impracticable for commercial purposes, and it was converted into a sailing packet that plied the coast of the United States until it was lost off Long Island in 1822. In the National Museum in Washington D.C. are the log book and a cylinder of this ship, in honor of which President Franklin D. Roosevelt in 1935 proclaimed May 22nd as National Maritime Day.

To lower transportation costs between the Savannah and Ogeechee rivers, the Ogeechee Canal was opened in 1828. In 1843, the Central of Georgia Railway was completed from Savannah to Macon. During this period, Savannah, because of its harbor, was the greatest port on the southern seaboard for cotton and naval stores.

The Mexican War of 1846 brought prominence to two Savannah men. Colonel Henry R. Jackson (1820-1898), later minister to Austria and to Mexico, served as commander of Georgia’s regiment. Josiah Tattnall (1796-1871) distinguished himself at Vera Cruz in command of the Mosquito Division of the United States Navy. During the period prior to the War Between the States, Savannah developed a sectionalism that made it respond instantly to the war cry in December, 1860. Now there were no Whigs and Tories to divide the city. Upon adoption of the Ordinance of Secession, Savannah men seized Fort Jackson, and in March of 1861, the Confederate flag floated over the customhouse. On April 10th, 1862, the 400 defenders of Fort Pulaski, occupied before secession by order of the fiery Governor Joseph E. Brown, were forced to surrender to Union soldiers. Although Fort Pulaski became a Union military prison, Savannah itself did not fall until 1864, when Union General William Tecumseh Sherman marched through Georgia to the coast. On December 13th, Sherman took Fort McAllister and on the 17th, demanded the surrender of Savannah. Confederate General W.J. Hardee and his 10,000 troops continued to skirmish three days longer before they evacuated the city by means of a new pontoon bridge to Hutchinson Island. On December 21st, 1864, Union troops occupied Savannah.

With the abolition of slavery and the collapse of the great plantations, the port ceased to function. But for all the poverty of Reconstruction and an appalling yellow fever epidemic in 1876, there was progress. With the establishment of the Naval Stores Exchange in 1882, Savannah became the leading turpentine and rosin port. During the First World War, boom prices caused shipyards to be hastily built along the waterfront, but a cataclysmic fall in business followed the boll weevil’s destruction of cotton in 1921. By 1926, control of the cotton pest had caused the port to regain much of its former activity.

Along Bull Street, which forms the central axis of the city, are five squares that, in the original city plan, were designed as centers of defense against Spanish and Indian invasion. With all its commercial and cultural successes, Savannah gains its individual charm from its atmosphere of the past.