James Parrish came to Texas from Ohio prior to 1844 as a member of the Peters Colony. He and his wife Eliza Jane (Record) moved to Dallas County about 1848. They established a home in this area on the Elm Fork of the Trinity River which became known as the Parrish neighborhood. Sometime before James Parrish’s death in October of 1853, he and his wife set aside land on their farm for a community cemetery. Joshua Hill was buried here in 1859, the apparent victim of smallpox. More interments occurred in the following decades, including those of James Pinson Howell (1865), John L. Howell (1866), and Malinda Pemberton Howell (about 1871). Also believed to be buried here are five men and a boy who were victims of a lynching in 1869; several Confederate veterans of the Civil War; and two former slaves. Although descendants estimate there were at least two hundred graves here, all but two have been lost to vandalism and development of the surrounding area. The two remaining tombstones mark the graves of one-day-old Oda Kirby (1909) and three-year-old Ervin Wickersham (1910-1913).

Cemetery is located on back of cul-de-sac at Christi Lane and S. Moore Road. 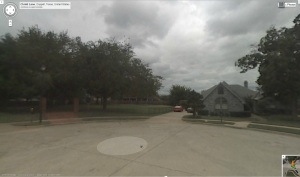