This roadside rest area is located on U.S. Highway 67, just south of Duke Road, between Gum Springs and Curtis, Arkansas.  The plaque on the cracked wall states this rest area was constructed by the National Youth Administration in 1936.  The rest area is on the north side of the abandoned earlier roadway of U.S. Highway 67.  The present U.S. Highway 67 runs parallel to the old route between Curtis and Gum Springs.  Much of the original concrete slab is still in existence, but is badly buckled in many spots.

U.S. Highway 67 follows the route of the Bankhead Highway through southwestern Arkansas.  The Bankhead started at Washington D.C. and crossed the continent through the southern states, ending at San Diego and passing through some of the South’s largest cities, including Atlanta, Birmingham, Memphis, Dallas, Ft. Worth, and El Paso. 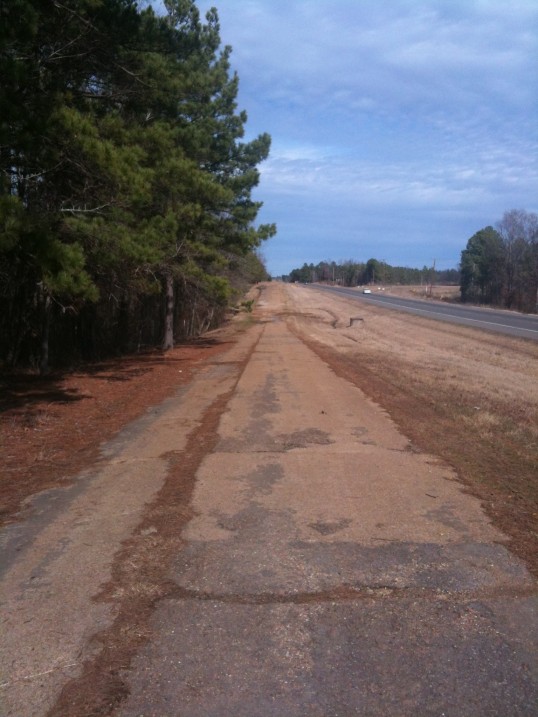 As a New Deal organization the National Youth Administration (NYA) was established within the Works Progress Administration (WPA) on June 26th, 1935, and funded by the Emergency Relief Appropriation Act of 1935. NYA provided work training based on U.S. citizenship and financial need for youth between ages sixteen and twenty-five. In addition to offering courses in writing, reading, and arithmetic, NYA operated two programs: the Works Project Program to train unemployed, out-of-school youth, and the Student Aid Program to provide work-study training for high school, college, and graduate students.

By 1938 camps converted to youth resident centers for participants who needed housing, particularly those from rural areas who could not travel. They lived in dormitories and trained for six to eight months. NYA utilized school campuses, but most centers’ facilities were built, maintained, and furnished by trainees. Residents received a thirty-dollar monthly stipend with twenty dollars deducted to cover room and board.

During its eight years of existence NYA trained more than two million nationally under the Student Aid Program and employed another 2.6 million youth through its Works Projects Program.[i]