Pinehurst, or so the house was called, was a substantial and commodious building, well suited for a large establishment of any kind. The house itself was built by Mr. Clarke Gamble, Q.C., about 1840, and was his home for about ten years, when he removed to Holland House. Mr. J. G. Howard was the architect. In 1850 Monsieur and Madame Dee-Landes rented Pinehurst from Mr. Gamble, and opened it as a ladies school, continuing there, having a large and fashionable clientele, until 1853, when they were succeeded by one of the most accomplished schoolmistresses and charming of women, Mrs. Forster. Mrs. Forster had been the wife of an English army officer, and she was the daughter of a Mr. Smith, who resided in one of the northern suburbs of London, England, where Mrs. Forster was born. The Reverend Thomas Smith Kennedy, formerly secretary of the Toronto Church Society, was a first cousin of Mrs. Forster, and on most intimate terms with her. From 1853 until 1866 did Mrs. Forster’ s school flourish, and probably no one who ever acted as schoolmistress was more liked by her pupils and more respected by their guardians. In 1866, Mrs. Forster’s health broke down utterly and completely, and she was compelled to relinquish her duties.  For many years Mrs. Forster was a chronic invalid, but survived until May, 1876, when she passed away. She was buried in St. James Cemetery.

This establishment was on the northside of Wellington Street, in a large brick house, east of Emily Street. Reverend Michael Willis, D.D., principal of Knox College in 1866, lived next door. The school was kept by Miss MacNally, a. Dublin lady, assisted by her three sisters, though Miss MacNally was the lady who was at the head of the establishment and who exercised entire control over everything. It was in 1846 that the school was commenced, and it was carried on by these ladies for about twelve years, until Miss MacNally s marriage with Mr. John Boyd, the sometime principal of the once famous school on Bay Street. Miss MacNally was one of the most accomplished of linguists, speaking French, German and Spanish with equal facility, and it was her invariable practice to address the various professors of these languages who taught in her school in their own tongue.

Miss Macartney was the lady principal, and reigned there as such for about six years, from 1854. Representatives of the Macklem family, of Chippewa, the Granges, of Guelph; the Hodders, of Toronto; the Hurds, of the same place; the Hardings, of Napanee; the Deuisons, of Dovercourt road and of Rusholme; the Berthous and the Hollands, also of Toronto, besides many more from various parts of the province, were educated there. Miss Macartney was the second daughter of an English officer, and her school was an exceedingly popular one. Later Miss Macartney married, and as Mrs. Nixon was the principal of a school in connection with the Anglican body. Some years later, she retired from scholastic work, and was affectionately remembered by all her old pupils. 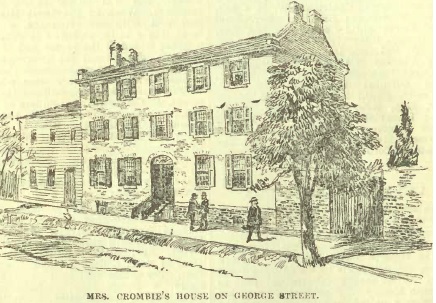 Another old-time scholastic establishment was that for small boys and kept by Mrs. Crombie, widow of Mr. M. C. Crombie, a former bead master of the Home District Grammar school on Nelson Street.   Mrs. Crombie s school was on George Street, in the northern of the two old fashioned three-storey brick houses on the east side of the street, in 1855, 28, now No 111. Mrs. Crombie was assisted by two of her sons and a daughter, and had a large number of pupils. Among them may be mentioned Toronto s chief of police in 1895, Mr. F. B. Cumberland.