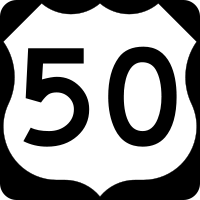 y 50 feels its way over a plateau region, past billowing foothills sparsely covered with sagebrush
and cacti, through winding canyons, and across clay flats. The colorful Book and Brown Cliffs hem the highway on the
north while the canyons of the Colorado River are glimpsed across the barren wasteland to the south. Between Green
River and Woodside, the San Rafael Swell is blackly silhouetted against the southern sky. West of Woodside, the highway
penetrates Utah’s fuel center, and the settlements draw closer together; thousands of tons of coal are shipped daily
from these mines. Mining towns straggle over the mountainsides between Price and Soldier Summit. West of Soldier
Summit, the road gradually loses the accompanying red sandstone formations, and picks up the gray-white limestone of
canyons flanking the highway to Spanish Fork. Between Spanish Fork and Salt Lake City, U.S. Highway 50, united with
U.S. Highway 91, skirts the western slopes of the Wasatch Mountains, and west of Salt Lake City, united much of the
way with U.S. Highway 40, the route penetrates smelting towns and crosses the Great Salt Lake Desert.