Dependent priory of Longueville sur Scie during the Middle Ages and up to the Revolution, the town of Neuville remained independent until the early 1980s, when it was attached to Dieppe. The first church located here was looted and burned in 1562 by Protestants. Only the chorus, probably rebuilt in the early 16th century (as evidenced by its sculpted pinnacles flamboyant decor foothills) escaped the flames. The reconstruction of the building proved slow and laborious and was not completed until about 1616, when it received its dedication. Rebuilt on a simple plan, the church has a nave flanked by aisles and a non-protruding transept opening to the choir. The bell tower, covered with a slate roof characteristic of the sixteenth century, supported by massive buttresses and drilled into the bottom of arched windows overlooking the western gate, is adorned with a statue of Bishop St. Aubin. Unlike the tower, built in stone as was the choir, the nave walls were built with local materials; flint blocks and blocks of sandstone alternating.

It is the inside which contains the most notable features of this building. The choir presents a rare rustic decoration of the eighteenth century, covering the shrine at a height of 5 meters high (pilasters, carved panels between which are inserted four paintings representing the four evangelists. Topping the central axis is a sculpted set representing a glory (sky filled with clouds and angels from which emerge the symbol of God).

The nave is covered by a barrel-shaped wooden hull vessel overturned and coated with plaster, while the ends of the beams of the frame are decorated with carved decorations; amazing twenty heads more or less grimacing, and five crests and heads resembling those of crocodiles.[i] 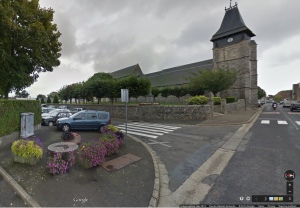