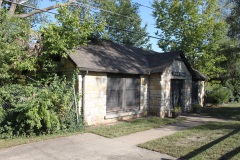 This structure was nominated to the National Register of Historic Places for its historical association with the Works Progress Administration’s (WPA) reservoir and recreational project that created Gardner Lake, a project which occurred between 1935 and 1938.  While there are no exact entries for the dates of construction for the beach house, it is likely that its construction occurred simultaneously with the beach, placing its construction between April of 1937 and May or June of 1938. The February 2nd, 1938, Gardner Gazette noted that the “bathing beach is graded and ready for its surfacing of sand.’  Interestingly, the beach house was never specifically identified in the project plans, and one can assume that it was classified as a shelter house at the time of its construction. However, since the beach opened for its first season in 1938, the building as always been known as the beach house.[i]